Welcome to the website page exploring the history of Lurgashall Parish

Lurgashall Archive is growing, and open to everyone

The job of an archivist is never done, and that’s how we like it, as it means there is always something new to discover about the history of our parish.

In 2023 we will continue to open the Archive Room at the village hall every month (opening dates for January and February above), and we welcome people to come and browse the growing collection, do their own research, or simply have a chat about memories of the village.

Throughout the coming year, we will share with you some vignettes of people who have lived in Lurgashall in the last century.

The first of these is Nellie Etherington.  We recently discovered this lovely photo of Nellie aged about 19 and it prompted us to find out more about her. (All information gleaned from publicly available sources.) 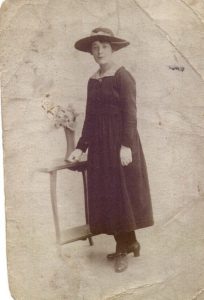 Nellie was born in 1900 to George William Etherington and his wife Margaret (née Brinsley).  She was the third of eight children who were all born and grew up in a three-roomed cottage in Windfallwood.  By 1911 the cottage was so crowded that George, the eldest son, moved in next door to his grandparents’ house, leaving his six sisters at home with their parents.

Nellie’s father was a pimp maker – a maker of firewood bundles, and at that time almost all the menfolk of Windfallwood were involved in copsing and working the woods in some fashion.  Their daughters were most likely to go into service, and this is probably what happened to Nellie when she left Lurgashall school in c.1914, aged 14.  She may have got a position in London because in 1923 she married a man from Bermondsey, Henry George Brent (1896-1971).  Henry’s father was a greengrocer and Henry was apprenticed in the bag trade before becoming a furrier and cleaning fur for a living.

Although Nellie and Henry married in Lurgashall, they settled in the borough of Southwark where they had four children.  By 1939 the family was living in Carshalton, Surrey, but their elder son John Victor (born 1925) was living at the time with his grandparents, Nellie’s parents, at Windfallwood, so the Lurgashall connection remained strong.

The couple continued to live in Carshalton until Henry’s death in 1971.  It appears that at some point after that Nellie returned to live in Lurgashall where she died in 1988, aged 87.