In order to comply with General Data Protection Regulation (GDPR), effective from 25th May 2018, Lurgashall Village Hall Management Committee requires the consent of any potential or actual hirers of the Hall who give personal information in their booking form.

Only relevant information is requested in order to facilitate your hire of the Hall or its equipment, or your participation in Hall events.

Your personal information data will never be shared with a third party.

If you are a hirer and complete a booking form, you are consenting to us holding and using your data in this way.  You may request its amendment or deletion at any time.

Any questions, please contact the Booking Secretary on 07796 162304 or email admin@lurgashallvillagehall.org

Simba idolizes his father, King Mufasa, and takes to heart his own royal destiny on the plains of Africa. But not everyone in the kingdom celebrates the new cub’s arrival. Scar, Mufasa’s brother — and former heir to the throne — has plans of his own. The battle for Pride Rock is soon ravaged with betrayal, tragedy and drama, ultimately resulting in Simba’s exile. Now, with help from a curious pair of newfound friends, Simba must figure out how to grow up and take back what is rightfully his.

Looking forward to Film Nights for the start of 2020…

After a glorious Summer, Autumn is here with her all too short-lived display of stunning colour now gently dropping to the ground. The Americans call it ‘Fall’ – such a perfectly descriptive word!
So onward we move into November and December, and wait to see what the Winter has in store for us…..
Well, whatever the weather, the Village Hall has plenty in store to entertain us.
Details of all events to follow soon.
Don’t forget PILATES. EVERY MONDAY EVENING between now and Christmas from 7.15pm – 8.15pm

For as little as £1 per month (minimum three months), you can help support our Village Hall as a vital hub for the community. 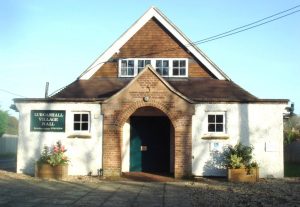 The 50:50 Club aims to provide funds for the development, improvement, maintenance and operating costs of the Hall, for the benefit of everyone in the village.

By becoming a member of the 50:50 Club, you will be entered into a monthly prize draw with cash prizes, and a bumper prize at Christmas!

For further information, or to join the 50:50 Club, please contact the Club Administrator at srmeyer2000@hotmail.com

Laurel and Hardy – the world’s greatest comedy team – face an uncertain future as the golden era of their Hollywood films is long behind them.  Diminished by age, the duo set out to reconnect with their adoring fans by touring variety halls in Britain in 1953.  The shows become an instant hit, but Stan and Ollie can’t quite shake the past, and long-buried tension and Hardy’s failing health start to threaten their precious partnership.

Steve Coogan as Stan Laurel and John C. Reilly as Oliver Hardy give superb performances in this touching and  funny film.

Looking ahead…. put the date in your diaries:

The annual Harvest Supper in Lurgashall Village Hall is a great tradition in the Parish and a lovely celebration of the end of summer.

The Supper takes place at 7.30pm, immediately after the Harvest Service in the Church.

If you’d like to join the Supper, you can buy your tickets (£7.50) at the village shop.
As this is always a very popular event, best to book early for a wonderful feast in great company!

The Village Hall Management Committee is very proud to announce the completion of a new extension to Lurgashall Village Hall.

The extension houses a much-needed store room for furniture and an archive and small meeting room. 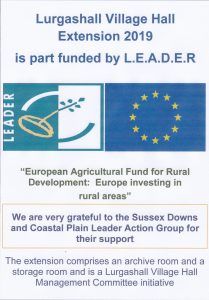 The buiding of the extension was made possible by many generous local donations as well as significant funding from the European Agricultural Fund for Rural Development, administered by the Sussex Downs and Coastal Plain L.E.A.D.E.R. Action Group.

We are immensely grateful to all our funders, to Hang Ups our builders, and to all our hirers who have borne with us through the build.