Welcome to the website page exploring the history of Lurgashall Parish 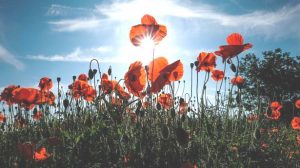 To the memory of Ferdinand Trussler and Edwin Lillywhite whose families lived at Mill Farm Cottages, Lurgashall, and who lost their lives in the First World War.

With deeply grateful thanks to Mike Oakland and his book ‘A Richer Dust’ for much of the biographical detail.

The 1911 census shows one Ferdinand Trussler, aged 31, living at C284 Mill Farm Cottages with his wife Elizabeth and their young family.  The C and number indicate that this and the adjacent cottage belonged to the Cowdray estate at that time (although they later became part of the Leconfield estate).  John Anstey and his family had moved up from Devon to take on Mill Farm just a few years before (c. 1904), and Ferdinand was working for him as a farm labourer.

Ferdinand was born at Bexley Hill in 1879 and, after school in Lodsworth, he became an agricultural labourer.  In 1899 he married a local woman, Elizabeth Sageman, and they started married life in Lodsworth.

Farm labourers had to move to wherever they could find work, so from Lodsworth the young family moved to Leggatt Hill in c.1901 before moving on to Mill Farm Cottages in Lurgashall in 1903.  By this time Elizabeth had borne four children, all of whom and their later siblings attended Lurgashall School.  Their last child, of ten, was born in June 1915, just nine days after Ferdinand embarked for France as a soldier in the Royal Sussex Regiment.

One year later, in the horrific Battle of the Somme, Ferdinand lost his life.  Elizabeth was left a widow at Mill Farm Cottages with seven children to look after and provide for.  The Anstey’s of Mill Farm generously allowed Elizabeth to stay on at Mill Farm Cottages, and in 1917 she was awarded an army pension of £33s 9d a week.

In 1919, after the premature death of her last child, aged just four, Elizabeth moved on to Graffham.  Twenty years later she was to be found living back in Lodsworth, sharing a home at Nursery Cottages with her widowed brother-in-law Albert Trussler.  Elizabeth died in 1963, aged 87.

There are two attached Mill Farm Cottages, and in 1911 the second (C285) was occupied by Lewis and Mary Lillywhite, their son Albert, aged 28 and a carter on Mill Farm, and daughter Alice, aged 18.

Albert’s older brother Edwin had long since left home and got married – to Sarah Grace Wyatt in Littlehampton in 1903.  Edwin’s occupations were variously carter, farm labourer and thatcher and, like so many others, he had to move around to where he could find work to support his growing family.  In 1905 the family moved from Littlehampton to Lurgashall, living first at Little Brockhurst and then at Bishops Cottages. Their six children (one had died in infancy) all went to Lurgashall School.

Edwin would have seen very little of his youngest child, Evelyn, who was baptised in August 1915 when he was already serving with the Royal Sussex Regiment and soon heading for France.  On July 7th 1916 Lance-Corporal Edwin Lillywhite lost his life during the first week of the Battle of the Somme.  At the age of thirty-eight, he was to be the oldest man from Lurgashall to die in the war.

Sarah Grace was left with six children under the age of 12 to fend for.  She first turned for support to her family in Littlehampton where she sent four of the children, but by the end of 1916 the family was all together again and living back at Bishops Cottages in Lurgashall.

In October that year Sarah Grace remarried.  She was then 35 and married Henry Talman, aged 38, a Private in the Queen’s Regiment.  Thankfully he survived the war although his younger brother John was killed serving in France in 1918.  Sarah Grace and Henry had four children together.

From 1939 to 1955 the family were living at Leggatt Farm (Hobstevens) where Henry was a labourer.  Sarah Grace died in 1955 and Henry in 1966.  They are buried together in Lurgashall churchyard.

John Boxall, who died on the Somme on the same day as Edwin Lillywhite and whose younger brother Joseph and wife Kathleen went on to live at Mill Farm Cottages in the 1930s.

Harry Greenfield, the third Lurgashall man tragically to die on that fateful day, 7th July 1916, on the Somme.