Did you know that Lurgashall Village Hall hires out its furniture, crockery, cutlery, glassware and almost anything else (but the kitchen sink!) that you might need for your party, picnic or big family Christmas? 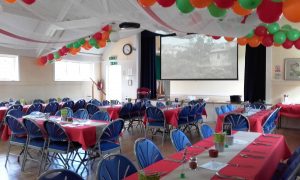 Have a look at our list of equipment for hire and our charges.  Our rates are very reasonable indeed.

To find out more, please go to our Booking page or contact the Booking Secretary on 07796 162304 or email admin@lurgashallvillagehall.org

Dr Don Shirley is a world-class African-American pianist who is about to embark on a concert tour in the Deep South in 1962. In need of a driver and protection, Shirley recruits Tony Lip, a tough-talking bouncer from an Italian-American neighbourhood in the Bronx.  Despite their differences, the two men soon develop an unexpected bond while confronting racism and danger in an era of segregation.

This is the true story of a remarkable friendship.

It’s that time of year again!  Francis and Rose will once again host the ever-popular Christmas Bingo in aid of the Village Hall.

‘Super prizes to be won –

An evening of enormous fun!’

In order to comply with General Data Protection Regulation (GDPR), effective from 25th May 2018, Lurgashall Village Hall Management Committee requires the consent of any potential or actual hirers of the Hall who give personal information in their booking form.

Only relevant information is requested in order to facilitate your hire of the Hall or its equipment, or your participation in Hall events.

Your personal information data will never be shared with a third party.

If you are a hirer and complete a booking form, you are consenting to us holding and using your data in this way.  You may request its amendment or deletion at any time.

Any questions, please contact the Booking Secretary on 07796 162304 or email admin@lurgashallvillagehall.org